[Recount of a trip taken to France in February 2008]

We woke up early this morning to attend the 8.30 a.m
mass at Notre Dame. It was a beautiful crisp morning. We
got out of the Metro and I headed towards the first set of gothic
spires I saw, assuming that it was the Notre Dame I was walking
towards. Later on, I found out that the spires were actually from the
Sainte Chappelle church. So, we got a little lost and went on a detour,
but it was lovely to be the only two people walking along the
street and along the Seine river at that early hour, with the gradual
pinking of the sky.

There was a small congregation at Notre Dame for the 8.30 a.m mass.
And so, we had a nice, tranquil setting. We stayed for the 10 a.m mass
as well, just to see the beginning of it since it was a Gregorian mass
and we wanted to listen to some of the gorgeous Gregorian chants. 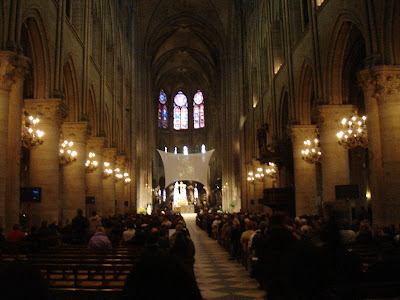 After mass, we walked around a bit in the church. It was a blustery
morning and Kavin was freezing as we walked towards the outside
of the church to check out the flying buttresses. 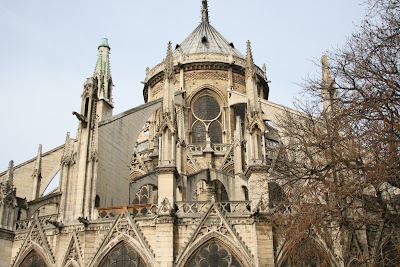 We went next to the underground museum called Crypte Archeologique.
to check out some of the remnants from the Roman-Gallo times, and
saw some baths and house buildings underground.

We walked across the Pont Au Change and stumbled upon a Chinese
food buffet restaurant. At 9 Euros, it was an attractive affordable option,
and Kavin was craving Chinese food anyway, so we settled into the small
restaurant for lunch.

It was fascinating to speak Mandarin to the two Chinese young ladies
manning the restaurant. Apparently, they’ve lived most of their lives
in France and French is their first language. They picked Mandarin
up from their parents. It’s fascinating how we usually expect people to
be like ourselves, taking ourselves as the norm, and when we find
differences between our expectations and reality, it fascinates us, open
up our previously narrow definitions of what the ‘norm’ might be.

Discovering people of Chinese descent in France who spoke French
and not Mandarin Chinese as their first language was surprisingly fascinating
to me at first, but I guess, it is not that surprising when compared with my situation, ie. speaking English as a first language.
I guess I can understand a bit better now,
people’s fascination that a woman from Singapore, who looks ethnically
Chinese, can speak English as her first language. I guesss I can appreciate
better, to a certain degree, the wide-eyed look of surprise I get when
I tell people who don’t know much about Singapore’s past as a British
colony, that I speak English as a first language, and not Mandarin
as one might suppose I would. And over the years, I’ve met more
and more people of Chinese descent who live in various parts of the world,
and have grown up speaking the language of the country that their
parents migrated to. Be it Spanish, Portuguese, Japanese or Indonesian.
What a colourful world we live in.

Anyway, after lunch and a carafe of water, we walked around,
passing by the Pompidou building which is essentially a building
that looks like it’s been turned inside out. All the pipes that would
normally be hidden within a building are exposed and coloured as
decorative at the Pompidou building. There, a silver-painted elf-dressed
man stood transfixed like a statue, standing on a box.

Kavin wanted to see what the ‘elf’ would do if he dropped a coin in the box. 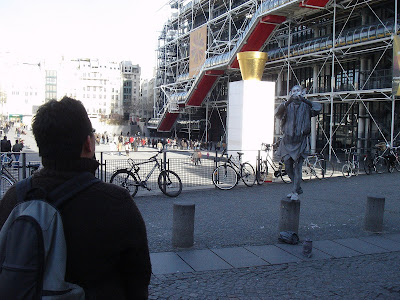 So he dropped a couple of coins in the box and the elf moved and turned, robot-like towards Kavin, gave a bow of thanks, and then put his pennywhistle to his lips and started playing a beautiful, child-like, wistful, fairy-tale-esque melody. It brought a smile to the faces of all who had gathered round to watch.
The ‘elf’ also serenaded a little boy who walked towards him.

Talk about discipline. I wonder how many hours, in the chilly wind,
the performer has to stay on that box in his fixed position. What a challenge
it must be to be able to move his body only within little moments in each hour.

Following this, we walked past Les Halles shopping centre and
took a look within the St. Eustache church. It was not as well-maintained as the Notre Dame, and in some sense, it was not as pretty, but there
was something about the roughness of the unpainted and unadorned
pillars, the antique quality of the pews and the simplicity of the church’s décor that spoke of a steadfast faith community that had endured the rough challenges of their faith through the years, and had emerged stronger.
It was a grey, robust-looking church with a quiet, graceful nature to it. 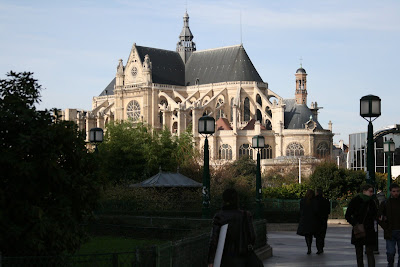 That’s my take on it. For Kavin, he liked the church’s interior because
it reminded him of one of the churches in his favourite computer games.  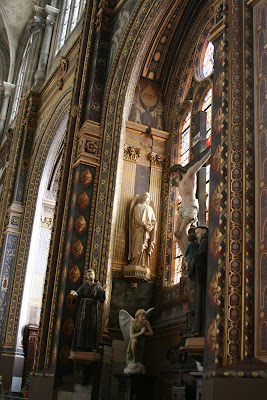 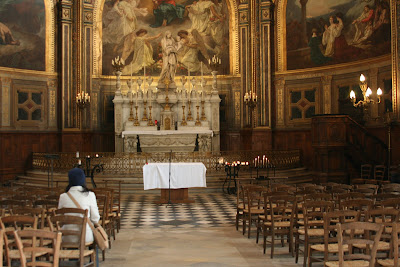 After this, we took the metro to the Musee National Du Moyen Age.
Since the first Sunday of the month is a day where everyone gets
free admission at the national museums in Paris, we decided to take
advantage of it.

The museum was crowded, but we still got to see various exhibits
of stained-glass, gold monstrances used in old churches, altar
decorations and wood sculptures and paintings of such events
in biblical history as the Annuciation, the presentation of Christ
at the temple and his crucifixion. Some of the paintings were
almost tangible in their portrayal of pain. (The dead Christ in His mother’s arms) 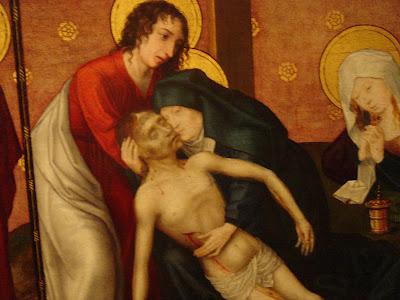 There was a plate holding a bronze effigy of John the Baptist’s head.

(John the Baptist’s head on a platter) 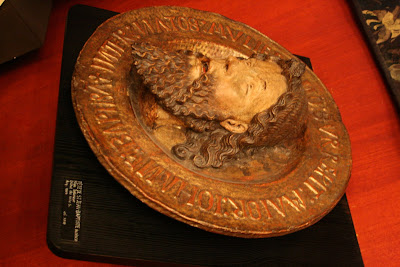 There was also a 15th century copy of the Liturgy of the Hours which
was a delight to view. 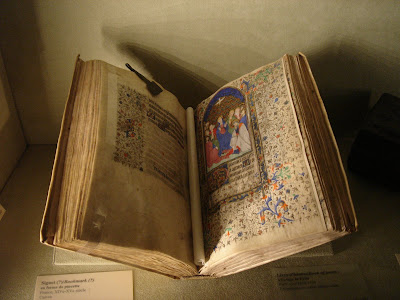 The highlight of the museums’ collection was definitely the series
of 6 tapestries collectively known as ‘The Lady And The Unicorn’.
the tapestries featured allegorical references to the sense of smell,
(lady making a flower chain, monkey smelling a rose),
sight (unicorn seeing its reflection in a mirror), 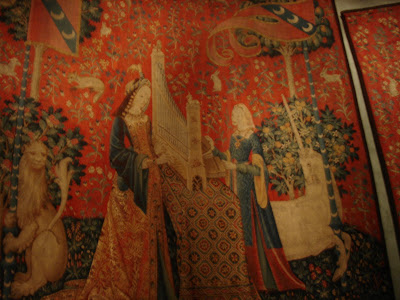 
The unicorn’s expression was very sweet and cute. I especially
liked the tapestry where he looks at his reflection in a mirror held
by the lady. 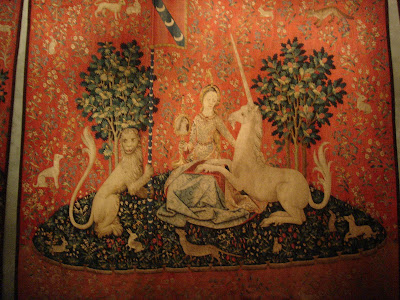 For dinner, we walked in some blustery winds to the Montparnasse
Tower, a 56-story building that stood higher than all the surrounding
low-rise buildings in the vicinity. The concierge had recommended the restaurant there for its views, as an alternative to the ‘booked 4 months in advance’ Jules Verne restaurant at the Eiffle.

I was a little disappointed that we didn’t get to sit right by the window, but we were pretty close to it and the view was still incredible
from where we sat. We got there around 7 p.m and by then, we could
see the Eiffle dancing with fairy-lights. It was a beautiful sight,
little yellow and white lights covering the entire tower…it was
as if the tower was dressed in a glittery sequined gown and was
twirling her hair around in a 360 degree arc. I had some scallops briochette and Kavin had a chicken fettucine
flavoured with foie gras. The food was tasted good, but the portions
were small and the cost was pretty pricey, but we were there more
for the view than anything else. From the window, we could
also spot the Arc De Triomphe and the streets spread out before
us like the spokes of a wheel. 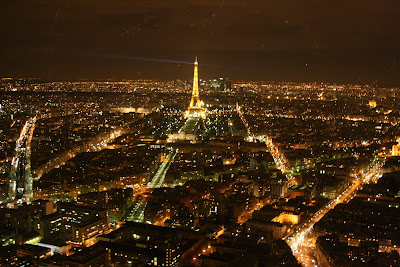 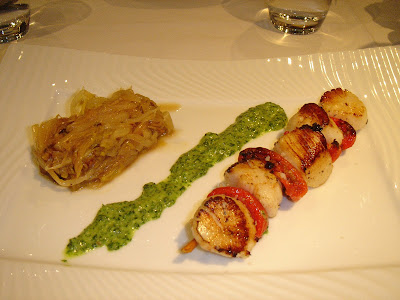 (Kavin and his food) 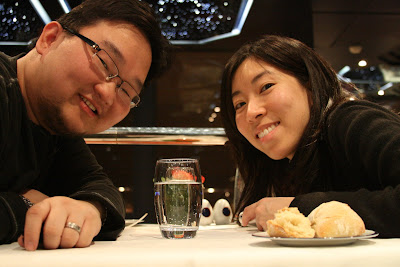 After dinner, we took a nice walk back to the hotel, but not
before picking up some crepes from a crepe stand along the
Blvd. Du Montparnasse. 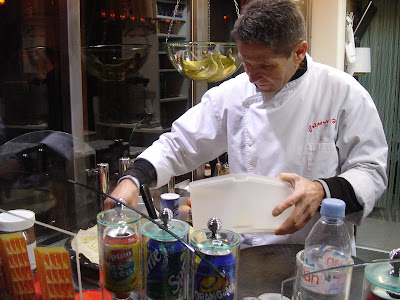